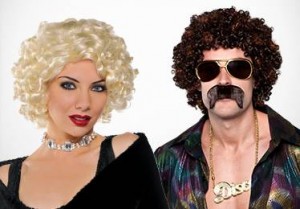 There was a time when rock stars were known for their long unkempt hair. Locks flowing down their foreheads, all the way to the shoulders and even beyond in some cases had become synonymous with being a rock musician. Whether you were a guitarist or a lead vocalist, it was all the same. From curly dense hair of Slash strumming his guitar atop a piano to Jon Bon Jovi singing atop a cliff, the genre of rock had become sensational with unique styles. Bare midriffs of lean and mean boys, leather pants, zipped jackets, headbands, sunglasses and tattooed physiques have often been integral to the appearance of a rock star.

Today is, however, a different era. While rock music continues to be popular, the perception of style has changed. Not many people sport the long hair look anymore. This is the era of gels and short spiky hair. But truth be told, nothing was cooler than rock stars with their looks in the eighties and nineties. Everyone aspired to get onto the stage and strum the guitar like they did, bang heads like the musicians did and get the crowd to groove, swing and go crazy with their unforgettable compositions.

If you wish to do that look yourself, then you have rock star wigs at your disposal. You cannot grow your hair that long in a jiffy and you may not be able to carry it everywhere you go. You may look amazing enough with your present hairstyle but wouldn’t you want to transcend to an era that pretty much defined a substantial part of our cultural evolution?

Get some of the most fascinating rock star wigs, inspired by famous rock stars of the past and present or completely unique which would suit your physical appearance and how you play. Whether you are playing heavy metal at a Halloween party or you are on a tour, rock star wigs can add that zing to your presence and performance.